The Significance of IL-18 in the Inflammatory Response

Inflammation is regulated by small glycoproteins called cytokines. Cytokines are cell signaling proteins in the immune response pathway1. Il-18 is a cytokine that primarily facilitates Th1-type immunoreactions by acting on T cells.

Cytokines are produced by many of the major cell types involved in inflammation: dendritic cells, monocytes, macrophages, neutrophils and epithelial cells. Like many cytokines, Il-18 is first synthesized in an inactive form. Il-18 is activated by an enzyme called caspase-12.

Il-18 stimulates Th1 cells in the presence of an anti-CD3 antibody and triggers the production of Il-13 and IFN-γ. Il-13 plays a prominent role in the stimulation of B cell proliferation and immunoglobulin production. IFN-γ is involved in almost all phases of inflammatory and immune responses. Il-18 also acts on basophils and mast cells to cause complex physiological reactions such as an allergic response.

A major regulator of Il-18 is Il-18 binding protein3. In homeostasis, the amount of Il-18 binding protein exceeds that of Il-18. This prevents Il-18 from activating an inflammatory response. However, the body starts a caspase-1 activating pathway that increase the levels of caspase-1 and causes higher levels of Il-18 to be active. The increased levels of active Il-18 help generate an inflammatory response4.

Il-18 has been found to play a role in a variety of disease states. High levels of Il-18 have been found in the blood of patients with many different types of allergic diseases. These include bronchial asthma, atopic dermatitis and allergic rhinitis. Moreover, high levels of Il-18 have been found in patients with autoimmune diseases such as rheumatoid arthritis, systemic lupus erythematosus [SLE], adult Still’s disease, multiple sclerosis, Chrohn’s disease and ulcerative colitis. In many of these diseases such as adult Still's disease Il-18 is found to be at very high concentration levels5. Lastly, Il-18 appears to mediate the progression of type II diabetes6.

MBL International offers a wide variety of products to help in your study of Il-18. Major products include: 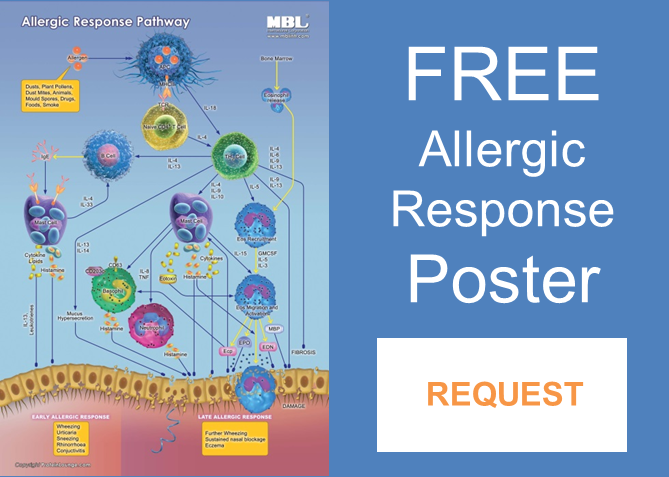 Why bother knowing if you are detecting Pro-IL18 or active IL-18?

Antibodies are wonderful.  They can act as little detectives to help you determine if the protein...
Read More

How do I even get started? Lessons for setting up your experiments

Why protein phosphorylation is crucial in disease research

Protein phosphorylation is quintessential for specific pathways to function.  This function can be...
Read More